There were once three little Hummingbird brothers, one blue, one red, and one yellow. They played in the sunshine, and flew among the flowers in the garden, and they never grew tired because they were so happy.

One day there came a heavy rain, and it wet their wings. They flew away home, but when they got there they found the door locked and the key gone. So they had to stay out of doors in the rain, and they grew wetter and wetter.

By and by they flew to the red and yellow hibiscus, and said, "Friends, will you open your flowers and let us in till the storm is over?"

But the little Hummingbirds said, "If our brothers may not find shelter in your flowers, why, then,we will stay outside in the rain with them.''

It rained harder and harder, and the poor birds grew wetter and wetter, so they flew to the blue Hibiscus and said, "Good Hibiscus, will you open your bud a little so we may creep in out of the rain?''

The Hibiscus answered: "The blue Hummingbird may come in, because he is like me, but the red and yellow ones must stay outside in the storm.''

Then the little blue Hummingbird said, "If you won't receive my red and yellow brothers, why, then, I'll stay out in the rain with them. We would rather be wet than be parted.''

So the three little Hummingbirds flew away.

But the sun, who was behind a cloud, heard it all, and he knew what good little brothers the birds were, and how they had held together in spite of the wet. So he pushed his face through the clouds, and chased away the rain, and shone brightly on the garden.

He dried the wings of the three little birds, and warmed their bodies. They ceased to sorrow, and danced among the flowers till evening, then they flew away home, and found the door wide open. 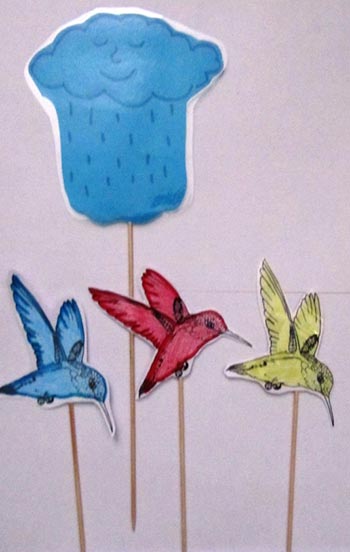